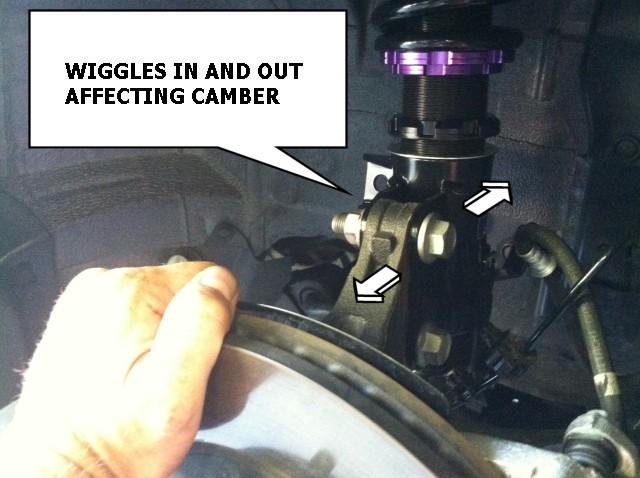 When it comes to building the perfect import vehicle, suspension is always one of the most important aspects. Regardless of what you plan on using the vehicle for, a good suspension set up is a key element in how your handles as well as looks. Follow along as we take you inside a D2 coilover installation on this Subaru WRX.

Before we begin the installation, we went ahead and laid out the product to make sure everything was there. The D2 kit should come complete with four strut/spring assemblies equipped with camber plates, turning wrenches and keys to adjust your ride. Once you’ve set everything aside it’s time to get started on the installation.

The first step in the process was to move the car onto a level working surface and jack the vehicle up. Once the vehicle is in the air, place a jack stand on each side in the factory reinforced area and go ahead and remove the front wheels. Once the wheels have been removed, it’s time to start taking the factory suspension apart.

Begin by removing the two, 12mm head bolts holding the brake lines in place; one for the ABS line and the other for the regular brakes. Next, using a 19mm wrench and socket, remove the upper strut bolts and pull the hub assembly away from the factory strut assembly. (Note: the upper strut bolt has an oblong shape to it for camber adjustment)

The last step to remove strut assembly is to remove the three 12mm bolts holding it in place. Under the hood, loosen the three bolts and get ready to remove the unit. If you don’t have an extra hand, hold the strut with one hand while removing the three bolts to ensure a safe removal. When you’re ready to pull the factory piece out, make sure to watch out for the brake lines.

Now that factory assembly has been removed, it’s time to install the D2 piece. Maneuver the D2 assembly into the upper mounting points and then reuse the three bolts from before and loosely screw the nuts on to the strut studs; doing so will keep the strut assembly in place so that you can work on the lower section.

The next step is where we install the lower section of the D2 strut assembly. In order to do this you’ll need to line the hub and mounting plate up and reinstall the two 19mm head bolts. (Note: remember the oblong head bolt goes on the top)

The final step in the front setup is to tighten all of the bolts used and zip tie the brake lines in to place; the factory torque specs on the two 19mm head bolts is 129 ft/lbs while the three upper nuts should be tightened to 14.5 ft/lbs. You’ll have to repeat these steps to complete the other side and then you’re ready to move on to the rear.

Using a 19mm wrench and 19mm socket, remove the upper and lower strut bolts. To remove the brake lines, use a “flat head” screwdriver and pry the retaining clip from the body. Next, remove the three 12mm nuts holding the strut into place, if you don’t have an extra hand make sure to hold the assembly in place as you remove the last nut.

Now that you’ve removed the factory strut assembly, install the D2 body and line it up with the upper mounting locations. Once again, loosely screw the nuts back on to hold the body in place while you work on the lower section. Reinstall the two 19mm head bolts on the lower section to 162 ft/lbs and then go back and tighten the three upper nuts to 14.5 ft/lbs.

With everything back in place, reinstall the rear seats and double-check your work. Make sure that everything is back where it’s supposed to be and all of the nuts and bolts are tightened to spec. If you’re through with that, put the rear wheels back on and lower the vehicle back to the ground. Check to ensure that the car is sitting even, making adjustments where necessary. If you’re satisfied with your cars ride height, take it out for a spin and set your dampening where it needs to be.

With the right tools and the right safety equipment, the installation shouldn’t take too long to complete. If you feel that you’re not qualified to complete the install we recommend taking your car to a reputable shop to have it done.