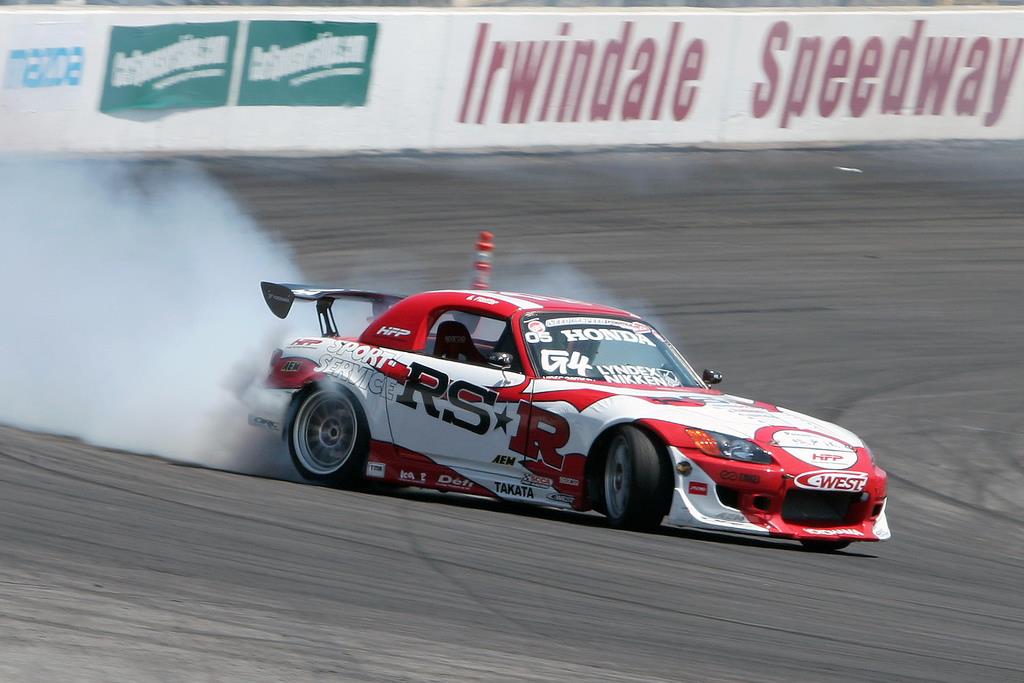 The crew at RS*R had a clear mission. They wanted to put the tune back in tuner and turn their micro manufacturer demo car into a true performer, the way that cars built by manufacturers were originally intended to be made. Because John Masuda, president of RS*R USA, was a huge Honda fan, the decision was made to use a Honda platform. However, the Honda camp had a sparse selection of cars deemed suitable for drifting with their front-engine, front-wheel drive configurations. Aside from the high-dollar NSX supercar which has drift obstacles of its own, there was one other car in the Honda stable that would fit the S2000. Naysayers almost immediately dismissed both RS*R and their weapon of choice. You can’t drift a road racer.RS*R only makes springs and mufflers what do they know? But with some extra power, a load of suspension tuning, and literally dozens of hours of tweaking and seat time, RS*R found the ideal formula.

The idea was to build a drift car that rivaled the dominators of the drift scene (the Silvia and the AE86 ) to come up with a Honda-based platform that was as light as an AE86 Toyota Corolla and as powerful as a Silvia. We needed to find a combination of these aspects, says Ben Chong, Director of Business Development for RS*R. These would yield the ultimate drift car, so to speak, that would be freely available in the US market, unlike a lot of the older platforms or the JDM-only models.

The S2000 is designed for road racing giving unreal grip an antithesis of what drifting is all about. A trial run proved that task would not be easy, as most testing concluded that the car was indeed built to hug the turns and blast through the straights and that the usable powerband was too far up the RPM range to make it a potent drifter.

To first correct the situation, the car was delivered to Gary Castillo of Design Craft Engineering and completely dissected. Castillo essentially reverse-engineered Honda’s masterwork and modified it to suit RS*R’s purposes. First the car was stripped to the shell, removing all panels and passenger amenities except for, oddly enough, the power windows. The dissecting effort proved fruitful as Castillo and the RS*R crew learned valuable amounts of information about the how the car was designed and what it was designed to do – almost a class in Honda engineering.

While the car is blanketed in the RS*R color scheme done up by Vinyl Mayhem, there is all kinds of technology beneath red and white sticky stuff. The vinyl is actually the final finish of an almost 100 percent dry carbon fiber shell makeover. A prototype C-West widebody kit, originally designed for Time Attack, replaced the factory steel panels throughout the chassis, with a carbon fiber trunk lid to round things off. The complete stripdown, along with the replacement carbon fiber panels, yielded a gross vehicle weight of 2,250 lbs.

Track testing proved the S2000’s worth as a RWD road racer. That is, getting the car sideways wasn’t the hard part; keeping it sideways at a steep drift angle was where the challenge was. A few test driver switches and the response was overwhelmingly similar; something wasn’t right with the steering. Aside from the chassis being overly stiff (a bad omen for seasoned drift drivers), Honda’s proprietary electronically controlled steering system was limiting the turning range of the car and taking away the feel of the road that drifters so require. To this end, the Honda steering rack was not so much scrapped as stowed away and replaced with a modified Mazda steering rack that fit almost perfectly and allowed a broader turning angle than the original unit. This allowed the S2000 to turn, and maintain slides, at angles never seen before out of an S2000 chassis. The factory fuel tank, which sat low and in the center of the vehicle, was also removed for a Fuel Safe fuel cell mounted in the trunk, where its weight would be advantageously used to help swing the car’s rear end more easily. With the suspension basics in place, attention then focused on the S2000 powerplant.

The 2.0L F20C that came with the 2003 model year vehicle produced good numbers on the dyno, but the powerband was severely lacking where it was needed most low to midrange RPMs. Feeling the need for larger displacement, RS*R stroked Honda for the larger, 2.2L F22C engine found in newer S2000s and had Design Craft engineer a turbo system that would better exploit the newfound midrange power and torque. While most of the exact specs are being kept under wraps, what can be seen is Garrett’s famous Disco Potato turbo a turbine housing designed specifically for early to midrange power at the expense of peak horsepower. Design Craft’s handiwork can also be seen in the trick V-mount intercooler and radiator setup, which all but forces the incoming air to cool down both the intake charge and the engine coolant, and nothing else. The factory compression was lowered from 11.0:1 to 9.0:1 to better safeguard the motor from boost pressure levels and detonation, but little else was revealed about the engine, including final horsepower numbers. It feels like a 500hp car, was the sentiment among most test drift drivers, and that’s almost everything RS*R is willing to reveal at this point; add in the AEM Engine Management System for the underhood orchestration and a Blitz SBC ID controller for boost duty, and that closes the book on the unclassified information on the S2000’s powerplant.

With the engine done, the final step in building the ultimate drift vehicle was to address the suspension and drivetrain. With RS*R being the number one spring manufacturer in Japan, this was right up their alley. A set of their I-Shocks 30-way adjustable, external reservoir coilovers were utilized at the four corners and coupled with RS*R’s own Ti2000 titanium springs. A quadruplet of Enkei RPF1 rollers bound by Yokohama AVS Sport tires in corresponding sizes provide the rolling and sliding contact surfaces. Aiding in the controlled slides is a set of RS*R’s Dorio brake pads, designed specifically for controlling drift vehicles. Spinning the entire rolling stock is the job of the Ogura Racing Clutch setup, consisting of lightened flywheel and twin-plate racing clutch set. The factory differential has been replaced by a KAAZ 1.5-way LSD and is housed by a Comptech reinforced differential housing. The 6-point Design Craft chromoly cage helps a stiffer chassis complement everything on the suspension list.

As expected, the interior is a reflection of the minimalist-race only ethic that surrounds the car, with a few unexpected twists. Not a single seat but two Sparco units outfitted with Takata harnesses call the interior home, while the factory dash and most of its gauges remain intact, albeit their jobs taken by a host of Defi gauges. A Sparco steering wheel provides most of the driver to vehicle interaction. The remaining panels have been removed, however, the power windows and factory glass still remain. With the car already at a low target weight of 2,250 pounds, the windows and hardtop ostensibly remain to allow for future weight reduction endeavors, should the car call for them.

This is doubtful, however, as the RS*R S2000 recently captured its first podium finish with Alex Pfeiffer at the controls during the Formula D event in Irwindale, California. We have a winning combination, says Koji Ikeda, RS*Rs Director of Sales and Marketing. But that doesn’t mean that we’re going to stop testing. We’ll keep figuring out how to make things better for the S2000 depending on Alex’s feedback. We’ve proven that it can be done, but we’re going to prove that we can do more. And, since the S2000 sponsor list is pretty lengthy American Honda Motor Co., Yokohama Tire Corp., Enkei International, Lyndex Nikken, C-West, Airsplat, KAAZ USA, Sparco USA, Takata, Ogura Racing Clutch, TMR, Hiro’s Auto Repair, Defi, and Dynamic Autosports their combined resources and RS*R’s unrelenting pursuit of perfection should lead them to greater victories and make podium finishes an everyday thing.