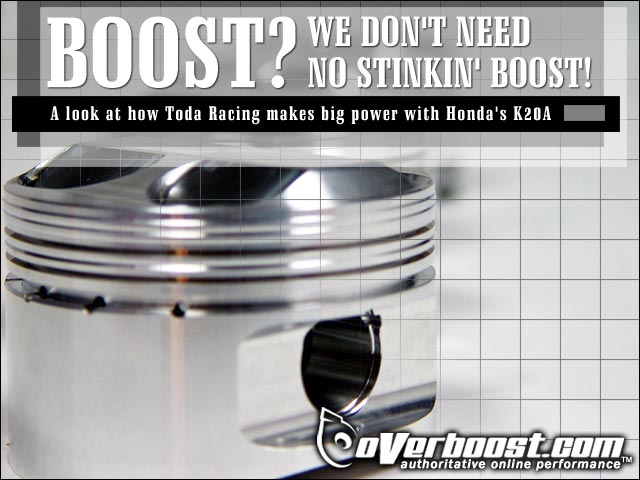 Technology is a fabulous thing when it is applied properly, especially in the case of engines. If you look at the K-series motors and compare them to the B-series, you’ll wonder why anyone is still running a B-series. Especially after seeing what happens when you get some serious brains behind it like the staff at Toda Racing.

Ali Jahed at Toda Racing says it is possible to make roughly 230 wheel-horsepower with bolt-on Toda parts and an average run-of-the-mill K20A. This is before you start tuning it with parts like cam sprockets and bumping up the compression. We had to see how this was possible without headwork, cam gears, or a second engine helping out.

All it took was a phone call and Jahed agreed to show us the way to K20 enlightenment.
He put down the parts out for all to see and showed us exactly how someone goes about making anywhere from 230 to 300 naturally aspirated, turbo-chasing horsepower with the K20A and how to do it with huge amounts of torque or no loss in drivability when compared to a B-series motor and even the larger H-series.

The car was making 230 horsepower at the wheels…

For as long as Hondas have existed, somewhere there have been mullet-wearing NASCAR fans snickering and joking about how Hondas don’t have enough power to run a weed whacker. And VTEC? What’s that? A Shot the vet gives my pet mule? The 20 total degrees of computer-controlled advance and retard on the intake cam of the K20A has changed all that by giving the RSX Type S impressive mid-range power which Toda enhances all while letting the motor spin just past 8800 rpm without ever letting the power drop below 220 horsepower at the wheels. How is it possible to get more power in the mid-range and enough cam to keep your foot planted deep into the red? There is more to it than VTEC. Keep reading and maybe you’ll learn something.

The first thing Jahed displayed for us was the Toda race header. It’s an incredible piece of work. Where the inner diameter of the tubing meets the flange is flawless, the welds are beautiful. It’s almost worth buying two just so there was always one sitting around to look at. You could buy three or four of what I like to call, the K-Mart headers, for what one of these full length headers costs. Four K-Mart headers will not last as long as this piece, or bolt on 18 wheel-horsepower on a car with a standard open intake and cat-back exhaust system. The downside is that the header eliminates the cat making it legal for off road vehicles only. The Toda race header has an extra O2 sensor bung in case you want to fit an air/fuel meter.

Next on the list was the Toda K20 engine kit. The kit is made up of Toda U.S.-Spec N2 camshafts, Toda Valve Springs and a reflashed ECU. On a car with an open intake, Toda Race Header, and a cat-back exhaust the Engine kit made 37 horsepower to the wheels over the existing mods with no loss of torque anywhere in the powerband above 2000 rpm and nice noticeable gains in the midrange. The car was now making 230 horsepower at the wheels and 159 lb. ft. of torque compared to 171 horsepower and 122 lb ft stock and 195 horsepower and 133 lb ft with just a header intake and exhaust. Remember that the Toda Race Header was 18 of the 24 horses made before the engine kit.

The computer adjustable cam timing is what makes the “i” in iVTEC so special. The computer moving the cam around for you is one reason the K20A is so torquey compared to a B-series motor. What is happening is at low rpm the intake cam runs advanced in varying degrees to bring the power earlier in the powerband. As the motor revs the timing begins to retard itself a certain amount to extend the power higher into the curve giving you a wider flatter powerband. It’s like having someone tuning a set of cam sprockets for you non stop. Toda Racing spent countless hours on the dyno tuning the iVTEC specifically for the N2 camshafts so there is no guess work with the engine kit. Just plug in your Toda ECU and go.

“With a B-series motor you’re usually stuck with a powerband in the 4500 rpm to 9500 rpm range where as with the K-series engines—because they are so much more advanced—you can have good, strong power from 2000 all the way to just short of 9000 rpm” Jahed says. “The new technology allows us to do things with the K-series that is not possible with the B-series engine” Jahed is very proud of the work put into the Toda engine kit and the consistency customers are able to achieve with these types of parts. “Everyone is going to get similar gains with our kit,” says Jahed. “There will not be instances like we have had in the past with the B-series where one customer can only get five horsepower out of a set of cams because he can not tune it correctly and another gets 20 because he lives next to one of the best tuning shops in the country.”

After the engine kit, finding power becomes a more serious hunt. Jahed recommends installing the Toda adjustable exhaust cam gear and the High Power head gasket for a slight bump in compression. The Cam Gear is an excellent way to add more power and tune the car to your liking on the dyno. Because the K20 has control of the intake camshaft timing only the exhaust sprocket is needed. Jahed says he has seen cars make an additional five or six horsepower across the powerband with a little tuning of the exhaust cam.

The head gasket will bump the compression to 11:5 to 1, boosting power, efficiency and response everywhere across the rpm range. This should be worth an easy three to five horsepower on its own. Combined with the Toda adjustable exhaust cam gear, you are looking at another eight to 11 horsepower for almost 250 at the wheels with once again, no loss of power in the lower rpm range at all. More compression always equals more torque, but it brings with it our old friend detonation. How much and how often are going to depend on your individual setup, intake temperature, gas quality, location and other factors. You may loose consistency with too much compression due to the car only wanting to run good in conditions where it does not ping so beware of how much you add.

Toda’s Lightweight chrome molly steel flywheel and clutch package are another excellent way to squeeze some more acceleration out of the K20A. Toda strips as much weight as possible out of the flywheel while still retaining the inertia needed for daily driving by setting weight in the right places. This gives you a motor that revs up and down noticeably faster than stock, but still drives like stock when you let the clutch out. In short, when you put your foot down the car is going jump forward like you never thought it could without adding more power underneath the hood. The clutch and pressure plate are balanced and feature heavy duty straps and rivets to hold the assembly together during abusive situations. Because the disc uses a full-face lining, clutch engagement is smooth and progressive. The flywheel and clutch set are available separately.

If you want to go farther still, Toda has high silicone content 12:5 to 1 compression forged pistons designed specifically to the same thermal expansion rate as the stock cast piston so you can run the same piston to wall clearance as the stock motor. These special forged pistons are quiet, long lasting and do not burn oil because they allow such tight tolerances for a forged piston. The secret is the high silicone content Toda uses because the pistons are not designed for use in a motor with boost or nitrous. (If you’re putting boost or nitrous through a 12.5:1 motor and you don’t know this already, you need to start riding a bicycle everywhere) With this racecar-like compression, more than 300 crank horsepower should be possible on race gas when combined with the Toda K20 VTEC Killer cams and the Sports Injection Kit.

The VTEC Killer series is not designed for street use, it eliminates the “i” function of the iVTEC and requires use of Toda’s adjustable intake cam gear so the cams can be tuned on the dyno with stand-alone engine management. The VTEC Killer series is designed to make power above 5000 rpm and makes the powerband of the K20 feel more like the older B series engines because of the lack of variable intake cam timing.

But why bother removing the technology? The variable intake cam timing is part of why the motor is so impressive when mildly tuned. When removed, the power gains made before VTEC switches over are all lost and the motor looses around 3000 rpm of powerband and is only fast at the track.

“With so many cars in Honda’s lineup that are aimed at fuel economy, emissions and practicality it is a relief to see that the K20 is a huge step forward and not a step back,” says Jahed. Think about what a CRX would run like with a 250 wheel-horsepower K20A stuffed in it. Hmmm I wonder if we can do Project K20 CRX after I complete Project Find $10,000 Under a Rock?