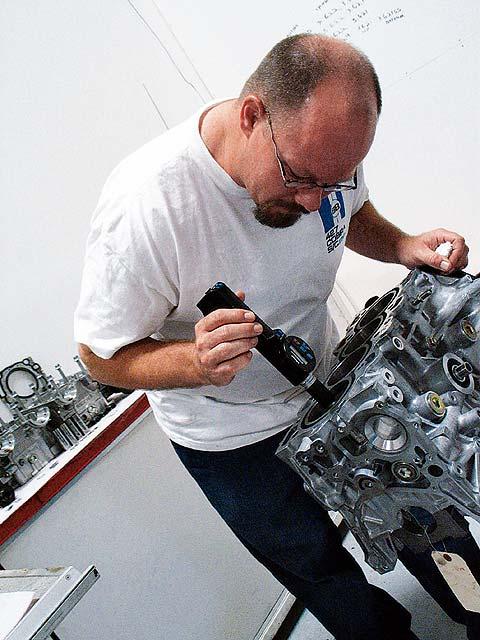 Many people have asked me who came up with the crazy idea of the LS VTEC, I knew was that it was Steve AKA Omniman. I decided to bug Steve to get the story straight from the horses mouth. So Steve sent me a copy of the story he was going to submit to a magazine. It looks like we got the jump on them who ever they are hehe. So here it is folks.. Paris

In my never ending quest for knowledge, I sometimes find myself searching around the internet. Looking to dispel myths and find truth about the “wonder parts” we all hear so much about. Somewhere along the line I found the story of how the first LS/VTEC came to be. For those who don’t know the LS/VTEC is a non VTEC 1.8 liter block found in most Acura Integra’s, and a VTEC head from a B16 (SiR), GS-R or Integra Type R put on top. Back in the late 90’s when North America first saw VTEC in a Dual Over Head Cam (DOHC) variation; everyone thought this swap couldn’t be done. However, necessity being also the mother of invention, allowed one person to try the impossible. I couldn’t possibly put it any better than the man who did the swap himself could. So I’ll let his words speak for themselves. Without further a due, here is the story of the first LS/VTEC from the originator Steve ‘Omniman’ Rothenbuehler:

How the LS/VTEC came about…….
The first LS/VTEC was built in Denver, Colorado at Speed Image, I worked there from 96-98.
It all started one night in the summer of 97 when we were driving home from work. I was in my 92 GSR and Hoang (the owner of speed image) was driving his cousins 92 CX hatch with a GS-R motor. While we were driving home the CX died on the freeway. We towed it back to the shop, pulled the head off and found that one of the stainless steel valves had broke, taking out the entire motor. After some investigating we finally found out that one of the other cousins had over revved the motor and bent the valves but didn’t want to get in trouble so he didn’t tell anyone. I felt really sorry for Tin the owner of the car. He spent a lot of money on it and now this had to happen. Tin literally spent every penny he had getting his motor in the car and running (everyone knows how that goes).

Hoang and I looked everywhere but could not find another GS-R motor, at least one that we could afford. The only thing we had at the shop was a 90k mile LS block that someone had sold us for a $100 and a GSR head. I started comparing things, like heads, blocks, head gaskets, oil pumps, etc it looked close enough for the most part and I decided to see if we could put the 2 together.

The first problem was the dowel pins had to be relocated to the other side of the head, no big deal. I went and bought a 9/16 drill (couldn’t find a 14mm) so 14.2 would have to do. I mocked up the motor with one valve in each side of the head kaddy corner so I could look through the exhaust port and see the intake valve and visa versa. With GS-R cams there seemed to be just enough clearance when VTEC was locked on. The cam timing even lined up perfect to our surprise. After that I installed the head (all stock) and put the motor in the car. When we finally got it running it felt great but there was no VTEC. So, back to the drawing board we went. I took the blown up motor and did some more comparing and noticed the oil hole where the VTEC got its oil pressure from wasn’t in the LS block. So I pulled the head off and figured if I added oil pressure to the passage it would work. Of course I had to plug up the hole in the bottom of the head so it wouldn’t leak.

With the head back on we took it out for a test drive and it worked. Not only did it work but, it felt faster than any N/A motor we had felt. I took it to Dyno Pro (the local dyno tuning place owned by Bear Lynch) and it put down 154 whp and 125 ft/lbs of torque.
About a month went by and we saved up and bought some type-r piston from the local Honda dealer. I wanted to see what would happen if I put a point of compression in it. When I went to install them the rods were too wide and would not fit in the pistons. I took the rods to a local machine shop and paid 50 bucks for them to shave 1mm off each side of the small end of the rods. They looked at me like I was crazy, but they did it anyways, after telling me they would not be responsible if it broke.

It was a Friday when I got the rods back so I worked on the car all night while all my friends were out clubbing. I finally got it started at about 12:30 am. After cleaning up I drove it home, and man was it faster. The funny thing is that I didn’t not have enough money to buy new rings so I put in used rings from some left over rebuilds I had done. I really just wanted to get this guys car back and running, since it was his only car.

The next day, everyone took turns driving it that weekend and we all wondered how much power the pistons made. The following Monday I took the car back to Dyno Pro and re-base lined it. Wow! It made 165whp and 132 ft/lbs of torque. The car felt really good even considering we were in Denver (5280 feet above sea level). The pistons picked up 11 whp, or should I say compression.
A few weeks later I drove it to Dynamic Autosports for an Integra Type-r intake cam and a throttle body. Also it was a good test to see how reliable it was, since it was an 1100 mile trip each way.

I made it no problem; the motor didn’t miss a beat, thank god (I was by myself with no cell phone). We installed the type-r cam and throttle body and put it on their dyno. We managed to hit 180whp with a full exhaust, a new NA record for their dyno. However; the next day some guy came in with a full race LS motor on carburetors and made 182. At least I had the record for a day.

After that, I drove the car back to Denver and there it lives. It has changed owners 3 times. The car it was in even won a burn out contest, its first bracket race, and was in a magazine (turbo I believe). It was still running up until the summer of 2003 when the 3rd owner accidentally ran it out of oil and pitched a rod through the block.